skip to main | skip to sidebar

Fleamarkets are pretty much over for me since most of them are too far but theres an indoor one thats close by but never has anything good and the game vendor there has a complete market hold on all the games. I found these inside a box for $2 each from some cool guy selling older records.

Goodwill is no longer a haven for older games since now they realize the value of classic gaming but sometimes games slip through the cracks and you might purchase affordable games.

Another great example of games falling through the cracks but its not very often that I find Dreamcast games anywhere.

I started hitting garage and yard sales and several of them have been misses but you only get lucky once in a great while. An incomplete Playstation for $5 but the worst was that there were no games to go along with them but the seller said she would find the games that went with it and would put sell them to me the next day if the weather was good. Bad weather crushed another good yard sale find but things were looking up with a couple of more Goodwill finds. A brand new PS2 controller sealed in the box for $7 which I couldn't pass up on and another Sega Smash Pack for the PC. Just how many are there?

These we're actually my very first yard sale purchases and couldn't believe that I would find anything at all. GameGear for $3 with missing battery covers. I don't know if the GameGear works but at $3 who cares. I needed a new Super NES controller at the time and I was damn lucky to come across this. $3 for the controller and it looks kickass with the clear display but it wasn't very great. The D pad was rough and doing those Blitzes in FF6 were a complete failure thanks to this controller.

I always go to the same thrift stores and never find anything so I took a chance and visited a Salvation Army across town with high expectations. War Zone and Aladdin for $4 each. Not my price range but I didn't want to leave empty handed. Another thrift store close to home almost always has nothing to offer but for one day there were handfuls of Playstation games for the taking. Theres yet another thrift store I regularly visit and always has games to offer if I'm willing to hunt to for them. Two Coolboarders in the same day? Thats not cool.

If I'm lucky and go to work in the afternoon on fridays then I always go to yard sales and thrift stores before going in. This was too good to be true. An incomplete NES for $12. Two controllers and a console thats been butchered but I could live with it. The Left 4 Dead was no good because the steam key was already used.

Saturday is the best day for yard sales but I had to go in early like always. I missed the yard sales close to work on friday but I knew there would be more on saturday. It was rough outside in the inferno heat walking house to house and finding nothing. Not even a sports game. The last yard sale close by and it's mostly toys and baby clothes and was ready to give up and go back to work but I see a lonely box on the ground. A Super NES console packed with games. This was the best yard sale find so far and I wanted it bad if the price was right. $20. I was hesitant and I was going to offer a lower price but before I could they lowered it to $15. I was sold but I was still reluctant because of these games.

The bane of all classic game finds. Sport titles. There was some ok titles among the pile but the rest were looking awful. Four games and a complete SNES console for $15? Ok sure. This is my second Super NES console now. As usual, I haven't tested the consoles or games. What am I going to do with the games that I don't want?
Posted by VGCF at 11:24 PM 1 comment: 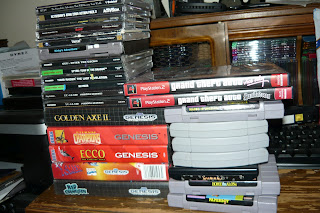 These have been sitting around and collecting dust and have finally been added to my backlog but who knows when I'll get around to enjoying them. It's becoming more difficult to find some classics since others beat me to them or thrift store owners think an NES is worth $100.
Posted by VGCF at 7:35 PM No comments: 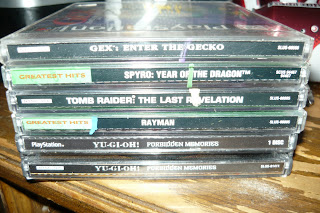 So there is a small thrift store that has several bookcases of CDs thats mostly 95% music, 4% games and 1% other. I've went through hundreds if not a thousand CD cases to find something relevant of my interests, it's these. I've gone through them before but it's been well over a year and after constant kneeling and laying on my side, these are my finds. Not a bad haul for $2 each.
Posted by VGCF at 8:59 PM No comments:

An awesome group of Playstation Magazine demo discs. This is probably about half of the total amount of PSX demo discs. I might get the other half some other time. 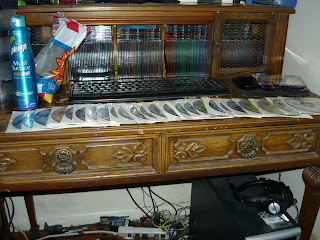 Okay for years I always wanted to make a videogameclassicsforever website but it's just not going to happen so a log of game finds will have to do. It's too bad I didn't do this sooner since I have years and years of purchases. I usually go to the same Goodwill, sometimes others but this one is so damn close. Just Taz-Mania and Killer Instinct. Man I always sucked at fighting games.

Next entry should be my eBay wins, demo discs! Exciting!

VGCF
United States
Not a collector! I just own a library of games.